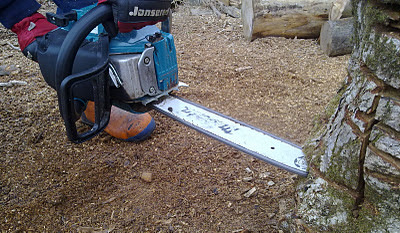 This is a bit of a bonus posting, as I've got 10 minutes free to quickly add an article! And so, in this post we're going to go back to the future and look at bore cuts. Why 'back to the future'? Well, bore cuts currently form part of the CS30 chainsaw maintenance course, but are heavily used during the CS31 (and CS32) felling courses; because of this, it'll be useful to both groups of people - those undertaking CS30 and those doing CS31. I'll try to put together a short video of completing a bore cut as it's much easier to see it, rather than describe it, but for now you'll have to make do with text! Find out more after the jump...

There are two types of bore cut: horizontal and vertical. The image at the top of the screen shows the horizontal bore cut, and is used a lot in conjunction with felling techniques (rear-weighted, forward weighted, medium and large fell). The vertical bore cut is used to cross-cut timber, especially where there is not enough room under the timber to physically fit the bar and chain, and you want to cut upwards; although there is enough room to bring the chain out of the bottom of the timber without it hitting the ground.
The Horizontal Bore Cut
The horizontal bore cut is slightly safer than the vertical bore cut, but is perhaps more difficult to get all the levels correct. You will need to keep the saw level from the tip of the bar back to the rear handle, as well as keeping it flat from side-to-side.
This is easily achieved by positioning your hands correctly on the handle; remembering that your thumb on the left hand must remain around the handle (see the Bad Habits: Thumbs Up! post). First off, getting it level from side-to-side is just a matter of moving your left hand right around the handle as far as practicable, this will automatically put the saw in the correct position. Easy!
Now for getting the saw level front-to-back. Many operators continue to hold their right hand in the same position (finger on the throttle) and twist their wrists to account for using the saw on its side. However, this often results in the rear handle being held higher than the tip of the bar and so the saw is not level. Instead, as you twist the saw on to its side, getting it ready for the horizontal cut, allow the rear handle to move around in your right hand; you should find that you can operate the throttle with your thumb.

Stand so that the underside of the nose of the bar will be introduced into the timber, then cut down to about where the nose sprocket rivets are. At this point, keep the nose of the bar in the same place and swing the rear handle around so that the saw is now directly pointing into the timber. Now push. Not too hard, and keep the saw running at full power until you have bored through to the required depth.
Allow the chain to stop in the bore cut before pulling it out of the wood (it might be wise to flick the chain brake on too at this point). Now, we are going to need to refine this a little bit but that'll be what the video is for... I just need to shoot it first ;0)
I reckon my 10 minutes is definitely up, and I'll leave vertical bore cuts for another post...
Posted by David Vickers

Definitely would like to see that video. I have great difficulty getting my bore cuts level and straight in